The Springhouse team extensively researched the cities environmental efforts and acquired the images that would serve as on-screen content. The final video presents a journey to 40 cities on a stylized map of the world. Kinetic transitions and light effects add energy to the animation as we zoom into each city and its featured project is displayed.

The project was created using a combination of After Effects and Final Cut Pro and as Freeland points out, “The reason for using a hybrid approach was to capitalize on the strengths of each. After Effects was the ideal environment for creating the animated city sequences and putting them together in a strong editing environment allowed for quick time adjustments and revisions.” 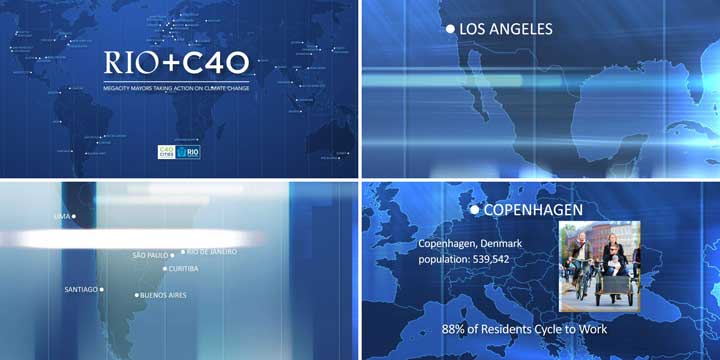 The C40 Climate Leadership Group is a network of large cities from around the world that are taking action to address climate change by developing and implementing policies and programs that generate measurable reductions in both greenhouse gas emissions and climate risks. As Mayor Michael Bloomberg, mayor of New York City and current chair of C40 has said, “While nations talk, cities act.”

Importance of the Individual at Gilda's Club